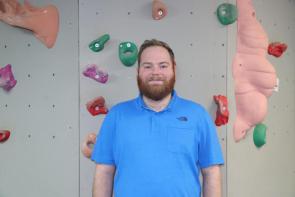 Fran comes from Ampthill in Bedfordshire, almost as far from the sea as you can get. At 14 he joined the Sea Cadets, where he competed at national level in drill, kayaking and sailing. He stayed in the cadets for 5 years as a staff member, training younger cadets, some of whom went on to join the Royal Navy. At 18 he qualified as a sailing and kayaking instructor and began working at outdoor centres.

These experiences fostered an interest in adventurous activities and leadership training. Following university, Fran began teaching outdoor adventure at Shuttleworth College, preparing students for careers in the outdoors, before taking the role of team leader in his department. He joined the team here in 2013, fulfilling his dream of living near the sea.

A keen songwriter, Fran has not only played at festivals, but also founded one in 2009 “AmpRocks” in his hometown, which has raised thousands of pounds for local good causes. Fran has a degree in Sport, Physical Education and Community Studies and is a qualified to instruct a variety of adventurous activities. He enjoys travelling and in 2014 spent 3 weeks in America, driving down Route 1 in California in a Ford Mustang before detouring to the Grand Canyon along Route 66.