"The highlight for me so far was winning the Regional Skillbuild Senior Decorator Competition that took place at Southampton City College!" 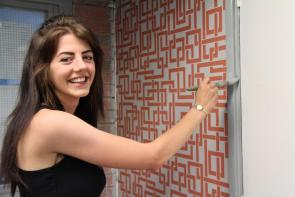 I didn’t initially decide to do painting and decorating, in fact I was initially doing Illustration Arts, but it wasn’t for me.  Then a family friend offered me the opportunity to go out with him doing painting and decorating jobs. When the company saw how well I was doing, they offered me an Apprenticeship.  Since then I’ve really developed my skills and I’m now working for a company that decorate properties in Sandbanks.

I’ve really been enjoying the work and have been excited by the money I can earn painting.  I also like that I can earn qualifications in it and that there are other elements to it like wallpapering.

The highlight for me so far was winning the Regional Skillbuild Senior Decorator Competition that took place at Southampton City College.  I couldn’t believe I won.  By lunchtime I felt like I was behind everyone else and began to panic, so when I came back after lunch I really focused and by the end, I was the only one to have completed the full design!

It was such a great experience. You have to learn to work quickly but still deliver the quality.  It is a mix of everything.

Doing the Apprenticeship I get to work on a construction site. This is great as I get to learn bits and pieces about the other trades such as plastering and carpentry.  It’s been really interesting.  I think it’s really good to have a trade as I will always have something to fall back on.

The best part of being a painter and decorator is the satisfaction of being able to see the results of your hard work.  And it doesn’t matter that I am female because everyone has been really great helping me learn.  I really recommend it!

We are home to around 11,000+ students from across the region, the UK and the world

On average over 600 students (50:50 full time and part time) study degree level courses at The College