2018 was a fantastic year for Bournemouth & Poole College students and alumni as acknowledgements and awards were received, and trophies were presented from regional and national competitions.

In March, two catering students won medals at the Major Series International Final held as part of the annual Hotelympia event at the Excel Centre in London. Adam Marki-Fejes and Hannah Fisher made their way to London for the final which saw them compete against nine other students from around the country. As winner of the competition Adam was presented with a silver award, £750 worth of vouchers; £500 for himself to purchase catering equipment of his choice and £250 for the college and was also invited to work with the Craft Guild of Chefs.

Adam gained further recognition along with other college students at the final of the Institute of Hospitality’s Southern Branch Student of the Year Awards, presented at the Balmer Lawn 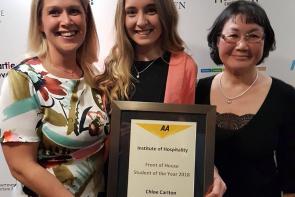 In October, for the fourth consecutive year, an award was secured at the prestigious annual British Marine Electrical and Electronics Association (BMEEA) national conference, held at the Novotel in Southampton. College students took part in an apprentice’s competition which featured teams from RNLI, Sunseeker International Ltd and Berthon Boats, with the College’s second year apprentices Jordan Warren and Fred Wills of Sunseeker winning the competition. 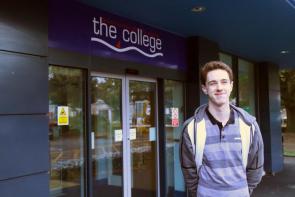 student Adam Dufresne won the Association of Colleges (AoC)'s esteemed national Young Student of the Year Award. The awards ceremony, celebrating the achievements of exceptional individuals from colleges across England, took place at the ITN “Learning for Life” premiere in Birmingham ahead of the AoC Annual Conference.

In addition at the Daily Echo Proud to Care Awards, which aim to recognise the individuals, businesses and care homes who go out of their way to improve the lives of others, Amy Brewer Smith, a Level 3 apprentice at the College, also won the Apprentice of the Year award. The finalists were invited to a glittering awards ceremony held at the Marsham Court Hotel in Bournemouth, where the worthy winners were revealed.

There was also great success for college apprentice Matthew Moore, who works for A&G Brickwork, as he achieved a top 10 placing in the World Skills Finals in Birmingham. To qualify for the finals, Matt had already won the Southern area regional competition at Brighton College earlier in the year. Matt impressed the judges with 2 competition pieces over 3 days; one a decorative piece featuring a Viking ship, and one incorporating a Welsh arch.

Former college student, Justin Baker, also triumphed after securing two academic awards at Bournemouth University’s recent graduation ceremony. The Bournemouth University Rosemary Pope Award was awarded to Justin for most outstanding student from a partner college of the University. Justin was also awarded a Chartered Institute of Marketing Award. These awards recognise his achievements and overall contribution whilst studying for a BA in Marketing Communications. Justin graduated with First Class Honours with the highest grade in his year group.

Finally, to Masterchef: The Professionals 2018 and the spectacular run of the college’s Specialised Chefs’ graduates Luke Phillips and Matthew Ryle. In December both former students made it into the final 6 of the national televised competition, proudly finishing our year off in style.

College Principal, Diane Grannell said: “We have a huge amount of talent here at our college. Our students continue to excel academically and vocationally, and it is very satisfying to see their efforts being rewarded across the county and the country.”

2019 promises to be another thrilling year of competition for the college and our students, and we can’t wait to report on our next successes.