What does Stephen think?

If you're considering an Access to Higher Education (HE) Diploma but not sure if it's for you, read Stephen's story to hear his experience. 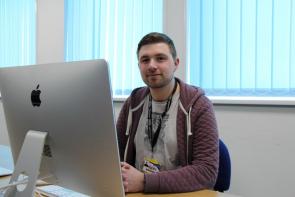 "After working my way up the career ladder, I found myself in London working in the banking industry. Although I had a well-paid job, there were redundancies on the horizon and I wasn’t feeling fulfilled, so decided to move back to Salisbury.

I left school with very few qualifications, so thought I would use the opportunity to go back to college. My grandad had worked in the film industry for many years, so I had always had an interest in films, so I began to research courses to follow that route.

A friend of mine suggested I look into Access Diplomas as they’re a one year course and a route to university. The Access to Media Diploma would give me the skills to go to university if I chose, so I applied.

The course itself is well structured and we have access to some great facilities such as a green room, plus the recording and sound equipment are good too. There’s been plenty of support if I’ve needed it. When I started I had to learn how to reference properly, but once you know how to do it, it’s really straight forward.

“I’ve gone from dealing with extremely wealthy people in London, to sitting in a classroom in Poole. They couldn’t be more different, but I am very glad I made the switch.”

Not so long ago, the thought of going to university wasn’t even something I had ever considered. I had my career in London and I thought that was it. However the prospect of redundancy changed that and here I am about to embark on the next three years of my life at university studying Visual Effects. I wouldn’t have got there if it hadn’t been for the Access to HE Diploma.

With the booming Media industry my future is looking very bright. There are two pathways that I’m considering within the industry, possibly moving to London or even California. I am constantly looking at jobs to make sure every decision I make will be of benefit for my future career.

Access to HE is a really enjoyable way to get to university. It does push you, but that’s a good thing. If you’re in a position where you’re not enjoying your job, life’s too short, just get out there and do something different."