What does Rob think?

If you're considering an Access to Higher Education (HE) Diploma but not sure if it's for you, read Rob's story to hear his experience. 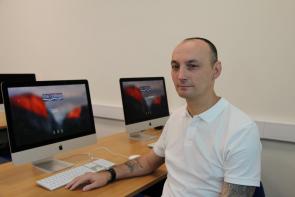 "I left school as soon as I could, but with very few qualifications and after a variety of careers, I eventually found a job that I loved – Electrical Installation and Engineering. I had really started to flourish when I was diagnosed with cancer. Due to the physical demands of the job, the diagnoses put an end to this career. However after my treatment had finished, I thought it would be a great opportunity to get back into education and achieve some qualifications.

I had no idea which course I wanted to do, so I attended an Open Day. I enjoyed design and technology, so wanted to do something that would enable me to bring them together.  I actually enrolled onto a computing course originally, but struggled with sitting down for long periods of time, so switched to the Access to Media course.

“I thought I would stick out like a sore thumb, one because of my age and two because I walk with a stick, but I quickly realised that I would fit in.”

When I started at college, I thought I would stick out like a sore thumb, one because of my age and two because I walk with a stick, but I quickly realised that I would fit in. The College is well equipped to accommodate those with disabilities and there are students using wheelchairs so I knew my disability wasn’t going to hold me back.

Studying is very different now compared to the 80s and it’s taken some time to get used to the way things work. For example I’ve had to learn how to use a Mac computer. However there is always support if I need it.

I’m funding the course through an Advanced Learner Loan which was really easy and straight forward to apply for. Plus the fact you don’t need to pay it back until you’re earning over a certain amount is also good to know.

This course has opened up so many avenues for the future. I could go to university, but it’s also sparked an interest in learning Japanese and also possibly even training to become a teacher. When I started I had no idea where the course would take me, but now I am really excited for my future prospects.

For anyone considering college, don’t think that you’ll be out of place in a classroom. Backgrounds and disabilities don’t come into it. College will increase your confidence and you’ll be surprised by what you can achieve. It’s one of the best things I’ve ever done."